I’m pleased to welcome you today to my stop on the blog tour for the heartbreaking The Librarian of Auschwitz by Antonio Iturbe, translated by Lilit Zekulin Thwaites. Thank you to Tracy Fenton and Ebury Press for giving me the opportunity to read and review this devastating and unforgettable book.

For readers of The Tattooist of Auschwitz and The Choice: this is the story of the smallest library in the world – and the most dangerous.

‘It wasn’t an extensive library. In fact, it consisted of eight books and some of them were in poor condition. But they were books. In this incredibly dark place, they were a reminder of less sombre times, when words rang out more loudly than machine guns…’

Fourteen-year-old Dita is one of the many imprisoned by the Nazis at Auschwitz. Taken, along with her mother and father, from the Terezín ghetto in Prague, Dita is adjusting to the constant terror that is life in the camp. When Jewish leader Fredy Hirsch asks Dita to take charge of the eight precious books the prisoners have managed to smuggle past the guards, she agrees. And so Dita becomes the secret librarian of Auschwitz, responsible for the safekeeping of the small collection of titles, as well as the ‘living books’ – prisoners of Auschwitz who know certain books so well, they too can be ‘borrowed’ to educate the children in the camp.

But books are extremely dangerous. They make people think. And nowhere are they more dangerous than in Block 31 of Auschwitz, the children’s block, where the slightest transgression can result in execution, no matter how young the transgressor… 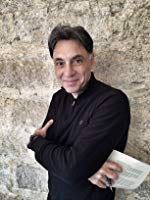 Lilit Zekulin Thwaites is an award-winning literary translator. After thirty years as an academic at La Trobe University in Australia, she retired from teaching and now focuses primarily on her ongoing translation and research projects.

Dita Kraus was born in Prague. In 1942, when Dita was thirteen years old , she and her parents were deported to Ghetto Theresienstadt and later to Auschwitz,. Neither of Dita’s parents survived. After the war Dita married the author Otto B. Kraus. They emigrated to Israel in 1949, where they both worked as teachers They had three children. Since Otto’s death in 2000 , Dita lives alone in Netanya.

She has four grandchildren and four great grandchildren. Despite the horrors of the concentration camps, Dita has kept her positive approach to life.

A book like this is never an easy one to review. With a story as emotive and devastatingly real as Dita’s, to say I enjoyed reading it would be the wrong word to use. Hers wasn’t a story I was familiar with, but it’s an important story to tell. This story, and millions more like it, need to be told over and over again so we never forget. So future generations never forget.

The Librarian of Auschwitz is based upon the true story of Dita Kraus, a fourteen year old girl who is put in charge of the eight precious books the prisoners have managed to smuggle past the guards of Block 31 in Auschwitz. This is the ‘children’s block’ and Dita lives in constant terror of being found out as books are considered dangerous, with the penalty of discovery being execution.

I can’t even begin to imagine what that must have been like. To not be allowed to read, something we all take for granted, is one thing, but for books to hold so much power that they are forbidden? And to live in constant fear for your life just because you have one? It doesn’t even bear thinking about. Although this is a fictionalised account of Dita’s life, I was constantly aware that this is based on truth. Much of what happened in this book really happened, as unbearable as that is to believe.

The courage of the prisoners of Auschwitz never cease to amaze and inspire me. What they went through and the horrors they must have seen is unimaginable, yet still they fought to survive. Jewish leader Fredy Hirsch, who asked Dita to become the secret librarian of Auschwitz, was someone who I found fascinating. His strength and resourcefulness under a time of extreme pressure was incredibly awe inspiring. As was Dita’s, who let’s not forget was only a young girl, and also so many others whose stories should also never be forgotten.

I was intrigued to read about the ‘living books’ who were another source of information, and who were invaluable in the teaching of the children of Auschwitz. These were prisoners who knew certain books so well they could be ‘borrowed’ from the secret library to help educate the children. How completely and utterly mind blowing is that? To knowingly put yourself in danger like that? I’d like to think that I would be so brave, but I’m not so sure I could be. And I hope I never have to find out!

The Librarian of Auschwitz isn’t an easy book to read. Just the mention of the name Dr. Josef Mengele and the word ‘twins’ in the same sentence had the ability to send a chill down my spine. But as brutally honest and devastating as this book is, what speaks to me the most is the courage and resilience of Dita, Fredy and all those around them. These people who are so much more than just a number, but who are living, breathing human beings with hopes and fears who, in spite of living in absolute terror, somehow keep going.

This book doesn’t flinch away from the truth. It’s an incredibly moving and gut wrenching read that, as difficult and emotive as it is, I’m so glad I read. The Librarian of Auschwitz is an important story to tell and, especially in these troubled times we are living in, is a time in history we should never, ever forget.

Antonio Iturbe has written an exceptional book that conveys the terror and depth of emotional turmoil Dita went through in an unflinching and realistic way. A heartbreaking story of true human courage that I will never forget.

The Librarian of Auschwitz is available to buy now: Amazon UK

Check out what these other lovely bloggers have to say: