I’m delighted to welcome you today to my stop on the blog tour for creepy horror debut The Pale Ones by Bartholomew Bennett. Thank you to the lovely Anne Cater from Random Things Tours for the invitation and to Inkandescent books for giving me the opportunity to read and review this book. 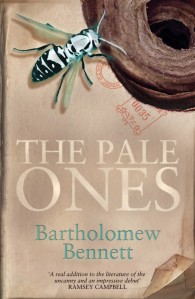 “An insidiously disquieting tale, flavourfully told. What begins as a dark comedy of book collecting gradually accumulates a profound sense of occult dread, which lingers long after the book is finished. It’s a real addition to the literature of the uncanny and an impressive debut for its uncompromising author.” RAMSEY CAMPBELL, author of the Brichester Mythos trilogy

Few books are treasured. Most linger in the dusty purgatory of the bookshelf, the attic, the charity shop, their sallow pages filled with superfluous knowledge. And with stories. Darker than ink, paler than paper, something is rustling through their pages.

Harris delights in collecting the unloved. And in helping people. Or so he says. He wonders if you have anything to donate. To his ‘children’. Used books are his game. Neat is sweet; battered is better. Tears, stains, broken spines – ugly doesn’t matter. Not a jot. And if you’ve left a little of yourself between the pages – a receipt or ticket, a mislaid letter, a scrawled note or number — that’s just perfect. He might call back.

Hangover Square meets Naked Lunch through the lens of a classic M. R. James ghost story. To hell and back again (and again) via Whitby, Scarborough and the Yorkshire Moors. Enjoy your Mobius-trip.

“To a soundtrack of wasps, The Pale Ones unsettles in the way of a parable by some contemporary, edgeland Lovecraft, or another of the authors the used-book dealers in this story no doubt seek out, Arthur Machen. The unnerving images which flicker in a sagging English landscape of charity shops, seaside bed and breakfasts and amusement arcades, washed with stale beer, linger in my imagination ages after reading.” ANTHONY CARTWRIGHT, author of Heartland, BBC Radio 4 Book at Bedtime

“THE PALE ONES reads as if Samuel Beckett decided to write a horror story after reading a bit of Aickman and Lovecraft. Its shifting landscape of English B&Bs, tawdry seaside hotels, and tatty pubs is haunted by glimpses of outlandish beings, half-forgotten wishes, and the forlorn ghosts of unfulfilled desires. It’s an outstanding debut.” Gary McMahon 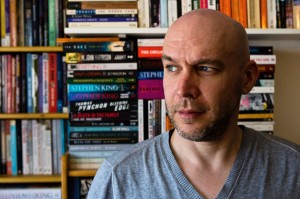 Bartholomew Richard Emenike Bennett was born in Leicester, the middle son of an American father and English mother. He has studied and worked in the US and New Zealand, and has a First Class Honours degree in Literature from the University of East Anglia. Since graduation he has had various jobs: primarily software developer, but also tutor, nanny, data-entry clerk and call-centre rep, project manager and J-Badger (ask your dad), painter and decorator, and (very slightly) handy-man, working at locations all across the United Kingdom. He has also been known to dabble in online bookselling.

The Pale Ones is his first published work, although he has been writing fiction continuously, long-form and short, since 2002. Currently he is at work on a novel about three children who experience a long, wintry December filled with gifts. Of the unusual variety. And trials. Of the trying variety.

Currently he lives in southeast London, with his wife and two young children. He is a longstanding member of Leather Lane Writers Group, and since childhood, a dedicated reader of all manner of books, but especially tales of the “horror”. And in fact, some of the paper-packed rooms that feature in The Pale Ones bear a remarkable resemblance to locales in his own abode…

The Pale Ones by Bartholomew Bennett is a book unlike any other I have ever read before. A short read, but one that packs a punch nevertheless. Not a horror story in a blood and guts kind of way, but one that fills you with a sense of unease from the very first page, with that uneasiness and dread increasing more and more with every word.

The story is told by an anonymous and unreliable narrator, so you can never be sure that what he is saying is the complete and honest truth. He is a bookseller who searches out used books and tries to sell them for a profit, but when he crosses the path of Harris, a creepy collector of books who (so he says) delights in collecting the unloved and in helping people, he gets so much more than he bargained for.

The fact that books are used in such a dark and creepy way throughout makes this story even more chilling to me. And even though I’m not sure I quite understood what was happening, even when I got to the end of this disturbing and extremely unsettling book, I don’t think that even matters. I have a feeling that the uncertainty and sense of uneasiness The Pale Ones left me with as I turned the final page was exactly how I was meant to feel.

Much of what happened in this unnerving horror debut is left open to interpretation. The weird and creepy Harris sent chills down my spine, and the dark and quirky supporting characters were memorable for all the wrong reasons, building and stretching the tension almost to breaking point with each new encounter. The looming pale shapes that are on the edge of our vision, but never quite fully in view add to the rising sense of dread, until we reach a strange and unsettling conclusion that makes you question everything you’ve just read.

Bartholomew Bennett has written a fascinating debut. His wonderfully descriptive writing has turned this horror story into a deliciously dark and eerie tale to remember.

The Pale Ones by Bartholomew Bennett is available to buy now: Amazon UK

Check out what these other awesome bloggers have to say: