I’m thrilled to welcome you today to my stop on the blog tour for chilling psychological thriller Hunting Evil by Chris Carter. Thank you to Anne Cater from Random Things Tours for the invitation and to Simon & Schuster books for giving me the opportunity to read and review this heartstoppingly fantastic book.

‘Every story one day comes to an end.’
As roommates, they met for the first time in college. Two of the brightest minds ever to graduate from Stamford Psychology University.
As adversaries, they met again in Quantico, Virginia. Robert Hunter had become the head of the LAPD’s Ultra Violent Crimes Unit. Lucien Folter had become the most prolific and dangerous serial killer the FBI had ever encountered.

Now, after spending three and a half years locked in solitary confinement, Lucien has finally managed to break free. And he’s angry.

For the past three and a half years, Lucien has thought of nothing else but vengeance.
The person responsible for locking him away has to pay, he has to suffer.
That person … is Robert Hunter.
And now it is finally time to execute the plan.

Chris Carter was born in Brasilia, Brazil where he spent his childhood and teenage years. After graduating from high school, he moved to the USA where he studied psychology with specialization in criminal behaviour. During his University years he held a variety of odd jobs, ranging from flipping burgers to being part of an all male exotic dancing group.

He worked as a criminal psychologist for several years, during which he interviewed and worked on over one hundred cases involving serial killers, murderers and serious offenders, before moving to Los Angeles, where he swapped the suits and briefcases for ripped jeans, bandanas and an electric guitar. After a spell playing for several well known glam rock bands, he decided to try his luck in London, where he was fortunate enough to have played for a number of famous artists. He toured the world several times as a professional musician.

A few years ago Chris gave it all up to become a full time writer.

Wow, what can I say? This book has completely blown my socks off! As a newcomer to the world of Robert Hunter, I was thrilled to be invited to take part in the blog tour for this book, especially as I was desperate to read it after hearing so many wonderful things about this series of books. But then I realised that Hunting Evil followed on from An Evil Mind, book six in the series, so I decided to go back and read that one first. You can find my mini review of An Evil Mind here: An Evil Mind

Although I’m glad I read it as it prepared me for what was to come, I don’t think it’s essential to read An Evil Mind first as enough information about what happened in that book are included in this one. But because I had read the previous book, I found my nerves stretched to breaking point almost from the very first page.

If Lucien Folter terrified you in An Evil Mind, he’s going to scare the living daylights out of you in Hunting Evil! Believe me when I say that what happened previously is nothing compared to how far Lucien is prepared to go now he’s free from the shackles of prison. The tension is unbearable as you slowly come to realise exactly what he has planned, with the fear becoming so palpable that I even had to take a breather as my nerves were stretched so tight.

Robert Hunter is already fast becoming a favourite character of mine, taking his place amongst characters such as Sarah Hilary’s Marnie Rome, Jo Nesbo’s Harry Hole and Kate Atkinson’s Jackson Brodie. All very different, but all with that special something that makes them so fascinating to read about.

This was the first time I’d met Robert Hunter’s partner, Carlos Garcia, as he wasn’t in book six, but I liked him from the outset. There’s a great supporting cast of characters, some of whom it’s very easy to root for and who you feel genuine fear for, as Chris Carter isn’t afraid of doing the unthinkable and anything (and I mean anything!) is possible.

Hunting Evil is a chilling psychological thriller that’s full of murder and suspense. It takes you on a taut and thrilling rollercoaster of a journey that quite simply takes your breath away. A shocking and spine tingling read that I highly recommend.

I can’t wait to see where Chris Carter is going to take the series from here, but I’m also eager to go back to the beginning to catch up on what I’ve missed! 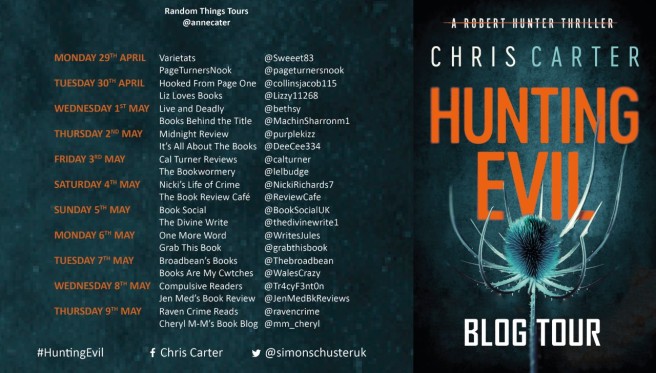