I’m delighted to welcome you today to my stop on the blog tour for gripping and emotional thriller Found by Erin Kinsley. Thank you to Anne Cater and Headline Publishing Group for giving me the opportunity to read and review this outstanding debut novel.

One child is safe… But how long until another is taken?

A gripping, heart-wrenching and beautifully written thriller about the unexpected return of a missing child, combining the suspense of Cara Hunter’s Close to Home with the searing emotion of TV dramas such as Broadchurch.

When 11 year old Evan vanishes without trace, his parents are plunged into their worst nightmare – especially as the police, under massive pressure, have no answers.

But months later Evan is unexpectedly found, frightened and refusing to speak. His loving family realise life will never be the same again.

DI Naylor knows that unless those who took Evan are caught, other children are in danger. And with Evan silent, she must race against time to find those responsible…

Erin Kinsley is a full-time writer. She grew up in Yorkshire and currently lives in East Anglia. Now writing under a pseudonym, her previous books were published by Bloomsbury. Longlisted for the Desmond Elliot prize amongst other awards, her writing has received glowing reviews across the national press.

Emotionally charged debut thriller Found by Erin Kinsley begins with the one thing every parent dreads: the abduction of a child. But unlike most thrillers of this type, this isn’t a fast paced race against time to find the missing boy. No, this book is very different to that. In Found, just as the title suggests, Evan is discovered struggling inside the boot of a car after being missing for several months. The frightened eleven year old is so traumatised he is refusing to speak, leaving his parents at their wits end as they try to come to terms with the fact that the happy go lucky eleven year old Evan once was is no more.

DI Naylor is desperate to find those responsible, knowing that it will only be a matter of time before the perpetrators strike again. But with police resources stretched to the limit and with little to go on, DI Naylor is moved on to other cases as Evan’s abduction is no longer considered a priority. But this doesn’t sit well with her and, together with DS Hagan and retired police officer Ron, Naylor continues to work on the case, hoping to make a breakthrough before another child and family are put through the same trauma Evan and his family have suffered.

Found focuses on the devastation caused by Evan’s abduction and the far reaching consequences it has on both him and his family. It’s a heart wrenching and beautifully written thriller that moved me beyond words, with Evan’s relationship with his grandfather, Jack, being a particular highlight for me.

My heart broke as the little boy struggled to come to terms with the horror of what has happened to him, unable to express how he’s feeling and too frightened to allow his family close enough to give him the comfort he’s so in need of. Jack’s untiring patience with Evan as he slowly begins to open up to him is written with a profound empathy and understanding that is heartachingly beautiful.

The emotional impact on the whole family makes this a powerful and at times harrowing read. The trauma Evan and his family go through is written sensitively and with empathy, never sensationalising what is a devastating and heartbreakingly all too real story.

As well as focusing on Evan and his family, Found is also a gripping police procedural thriller that becomes a race against time as DI Naylor and her team try to bring those responsible to justice. It is a devastatingly honest portrayal of a family torn apart by the unimaginable and felt very much like the TV drama Broadchurch, with the perfect mix between detective work and family drama.

Erin Kinsley has written an emotional rollercoaster of a story that kept me enthralled from beginning to end.  I look forward to reading more by this talented author in the future. Highly recommended.

Check out what these other fabulous bloggers say about this book: 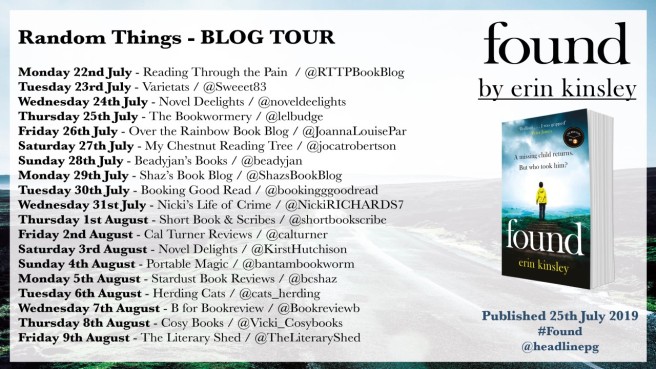