Today I’m delighted to share with you my book review of gripping psychological thriller The Escape Room by Megan Goldin as part of the St. Martin’s Press blog tour. Thank you to Kelly Klein for the invitation and to the publisher for providing me with my copy of this book.

Welcome to the escape room. Your goal is simple. Get out alive.

In the lucrative world of finance, Vincent, Jules, Sylvie, and Sam are at the top of their game. They’ve mastered the art of the deal and celebrate their success in style—but a life of extreme luxury always comes at a cost.

Invited to participate in an escape room as a team-building exercise, the ferociously competitive co-workers crowd into the elevator of a high rise building, eager to prove themselves. But when the lights go off and the doors stay shut, it quickly becomes clear that this is no ordinary competition: they’re caught in a dangerous game of survival.

Trapped in the dark, the colleagues must put aside their bitter rivalries and work together to solve cryptic clues to break free. But as the game begins to reveal the team’s darkest secrets, they realize there’s a price to be paid for the terrible deeds they committed in their ruthless climb up the corporate ladder. As tempers fray, and the clues turn deadly, they must solve one final chilling puzzle: which one of them will kill in order to survive? 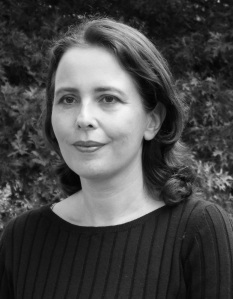 MEGAN GOLDIN worked as a correspondent for Reuters and other media outlets where she covered war, peace, international terrorism and financial meltdowns in the Middle East and Asia. She is now based in Melbourne, Australia where she raises three sons and is a foster mum to Labrador puppies learning to be guide dogs. THE ESCAPE ROOM is her debut novel.

Let me start off this review by saying I’m absolutely petrified of elevators and avoid using them at all costs, so this book was guaranteed to give me the heebie jeebies from the start! The idea of being stuck in one without any means of getting out makes me break out in a sweat just at the thought, so the claustrophobic feel of The Escape Room got under my skin from the word go.

Vincent, Jules, Sylvie, and Sam are summoned to a meeting in a high rise building, but when they get there they’re told they are about to take part in a team building exercise. They enter the elevator thinking it’s going to take them to their destination when suddenly the lights go out and it shudders to a standstill. And so begins The Escape Room challenge. But it soon becomes clear that this is no ordinary competition, and soon they find themselves caught up in a dangerous game of survival.

Trapped in the dark, the four colleagues must put aside their differences and attempt to solve a series of cryptic clues. But as their dark secrets begin to emerge, they soon begin to realise that someone is about to make them pay for the terrible deeds they’ve committed in their ruthlesss climb to the top of the corporate ladder.

What follows is a tense and gripping psychological thriller that skips back and forth between two timelines, one told from the point of view of new recruit Sara Hall several years earlier and the second from inside the claustrophobic and deadly elevator.

The Escape Room by Megan Goldin kept me gripped from beginning to end. It’s a page turner of a novel, with some unexpectedly moving and shocking moments as our characters find themselves caught up in the cut throat world of Wall Street. The four colleagues have very few redeeming features, but this didn’t take away from the story as you can’t help but find yourself willing the inhabitants of the elevator to finally get the comeuppance they deserve.

The Escape Room is a chilling and addictive debut thriller that I would highly recommend.

The Escape Room by Megan Goldin is available to buy now: