I’m thrilled to welcome you today to my stop on the blog tour for dark and gripping thriller A River of Bodies by Kevin Doyle. Thank you to Anne Cater and Blackstaff Press for giving me the opportunity to read and review this book. 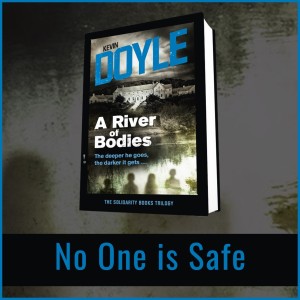 In this sequel to his impressive debut novel To Keep A Bird Singing, Kevin Doyle delves further into the murky world of the powerful Donnelly family and their association with the Catholic church and the security forces. The clock is ticking as Noelie and his friends try to uncover the network of corruption and deception that the family have used to protect themselves and their operations. But Albert Donnelly is onto Noelie and there’s nothing he won’t do to stop him.

Edgy, dark and sharp, Kevin Doyle’s A River of Bodies is a cracking political thriller – restless, brilliantly plotted and topical.

Kevin Doyle is from Cork and works as a writer and creative writing teacher. He has been published in many literary journals, including Stinging Fly, The Cork Review, Southwords and The Cúirt Journal.

In 2018, he published his first novel, To Keep A Bird Singing. He lives in Cork.

A River of Bodies by Kevin Doyle is the second in the Solidarity Books Trilogy and is a strong addition to the Emerald Noir genre. A direct sequel to the impressive first book in the series To Keep A Bird Singing, this book delves even deeper into the murky world of the powerful Donnelly family and their long association with the Catholic Church and the security forces.

Noel ‘Noelie’ Sullivan is still trying to come to terms with the devastating events of the previous story, but the clock is ticking and Noelie and his friends must try to uncover the network of corruption and deception that the Donnelly family have used to protect themselves and their operations. The despicable Albert Donnelly is back and will stop at nothing to keep the truth from being exposed.

To Keep A Bird Singing was an impressive debut that was set in Cork in 2010. With austerity biting, downbeat and disaffected Noelie unwittingly stumbled upon some long hidden information that threatened to expose the corrupt and powerful Donnelly brothers who have ties to Danesfort, a former industrial school near Cork. What Noelie doesn’t know is that Special Branch are watching his every move and they have a vested interest in making sure that he doesn’t discover the truth.

With those closest to him in danger, Noelie and his best friend, Hannah, try to uncover the truth, exposing themselves to more danger in the process. With the help of Meabh, the daughter of a man closely involved with the Donnelly brothers, Noelie discovers secrets that go back many years and realises these strong and powerful men will never allow the horrifying truth to be exposed.

In A River of Bodies, with Hannah gone, Noelie finds himself in danger once again. Alongside Meabh, Black Gary and his friend Martin, Noelie is in a race against time to bring the Donnelly brothers down before it’s too late. What follows is yet another dark, gritty and disturbing political thriller that packs an emotional punch to the gut. Noelie is a character I liked from the outset, a fairly ordinary man with a political activist past, who accidentally finds himself embroiled in a world he could never have envisioned.

Although the pace is slower in this second installment, there is an underlying tension that kept my heart racing throughout. The sense of danger is palpable and the Donnelly’s are a family I would not like to cross! Kevin Doyle has written a sequel as impressive as the first and I can’t wait to read what I’m sure will be a thrilling conclusion to the Solidarity Books Trilogy.

The first two books in the Solidarity Books Trilogy by Kevin Doyle are available to buy from Amazon UK now: Book One and Book Two

Check out what these other fabulous bloggers have had to say about this book: