I’m delighted to welcome you today to my stop on the blog tour for stunning thriller Blood Song by Johana Gustawsson. Thank you to Anne Cater and Orenda Books for giving me the opportunity to read and review this fantastic book. 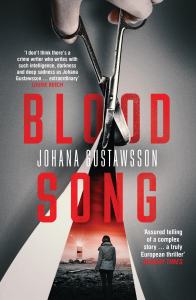 The country is wracked by civil war, and as Valencia falls to Franco’s brutal dictatorship, Republican Teresa witnesses the murders of her family. Captured and sent to the notorious Las Ventas women’s prison, Teresa gives birth to a daughter who is forcibly taken from her.

A wealthy family is found savagely murdered in their luxurious home. Discovering that her parents have been slaughtered, Aliénor Lindbergh, a new recruit to the UK’s Scotland Yard, rushes back to Sweden and finds her hometown rocked by the massacre.

Profiler Emily Roy joins forces with Aliénor and her colleague, true-crime writer Alexis Castells, and they soon find themselves on the trail of a monstrous and prolific killer, in an investigation that takes them from the Swedish fertility clinics of the present day back to the terror of Franco’s rule, and the horrifying events that took place in Spanish orphanages under its rule…

Born in Marseille, France, and with a degree in Political Science, Johana Gustawsson has worked as a journalist for the French and Spanish press and television. Her critically acclaimed Roy & Castells series has won the Plume d’Argent, Balai de la découverte, Balai d’Or and Prix Marseillais du Polar awards, and is now published in nineteen countries.

A TV adaptation is currently underway in a French, Swedish and UK co-production. Johana lives in London with her Swedish husband and their three sons. She drew on her own experience of fertility clinics and IVF to write Blood Song and is happy to speak and write pieces about this.

Blood Song by French author Johana Gustawsson is the third book in the award-winning, critically acclaimed Roy & Castells series, featuring true-crime writer Alexis Castells and profiler Emily Roy. Superbly translated by David Warriner, it’s a dual timeline novel that sees our protagonists on the trail of a prolific and monstrous murderer that takes them from the Swedish fertility clinics of the present day back to the terror of Franco’s rule, and the horrifying events that took place in Spanish orphanages under its rule.

Although I haven’t read the previous novels in the series, I didn’t feel this hindered my enjoyment of the story at all. Enough backstory was given so it didn’t feel as though I was missing out on anything but, that being said, Blood Song was such an amazing introduction to these fascinating characters that I will definitely go back and read the first two books in the series, Block 46 and Keeper. I warmed to Alexis and Emily from the start, but completely lost my heart to Aliénor whose story features so heavily in this instalment. A character written with such sensitivity and warmth, I found myself drawn to Aliénor from the outset and couldn’t help but feel immeasurable empathy for her and the situation she found herself in.

The historical element of Blood Song is a time in history I knew very little about, so this was an aspect of the story I found fascinating. I love books that go back and forth in time and Johana Gustawsson does it with ease here, taking us back to the Spain of the 1930’s during the reign of dictator Francisco Franco and highlighting the brutality of his regime. Some of these flashbacks are incredibly difficult to read, but are vital to the telling of the story. The time period is brought vividly and horrifically to life, with the strands of the past eventually entwining with the events of the present day.

What do the murders of a prestigious Swedish family, parents of Alexis and Emily’s colleague Aliénor, have to do with the shocking events of the past? Was it anything to do with the IVF clinic that Aliénor’s parents ran? Or was it something personal that attracted the attention of the killer? As the pieces of the puzzle slowly begin to slot into place, the devastating truth is finally revealed, culminating in a shocking denouement that kept me on the edge of my seat right up until the final page had been turned.

A brilliantly written, heartbreaking read that will stay with me, Blood Song brings this devastating period in history vividly to life. It is an important story that needed to be told, giving a voice to people who have been silenced for far too long. Johana Gustawsson has written a stunning, moving and thought provoking novel that deserves to be read by as wide an audience as possible. Skilfully translated by David Warriner, this is an outstanding addition to the Nordic Noir genre. Highly recommended.

Check out what these other lovely bloggers have to say about this fantastic book: