I’m thrilled to welcome you today to my stop on the Hodder & Stoughton blog tour for the emotive and thought provoking novel The Swap by Fiona Mitchell. Thank you to Jenny Platt for the invitation and to Hodder & Stoughton for giving me the opportunity to read this fascinating book. 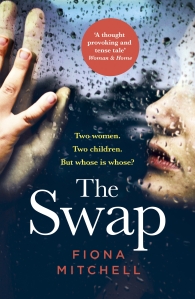 What would you do if you found out your child wasn’t yours?

But whose is whose?

When two strangers, Tess and Annie, undergo IVF at an American clinic, their embryos are mixed up and each woman gives birth to the wrong child. And whilst they are ignorant to this fact something has always felt a bit ‘off’ in regards to their children.

The women only discover the devastating error three years later, after one of them is involved in an accident.

Tess will do anything in her power to swap the children back; Annie doesn’t want to. As the pair wrangle, neither of them expect what unfolds.

This is a novel full of the complexities of how what happens when things can go wrong with IVF and the impact this can have on so many people. The moral issue about whose is whose child, the right versus the wrong and nature verses nurture.

This is a powerful and thought provoking novel about making the best decision for your children no matter how painful that can be. 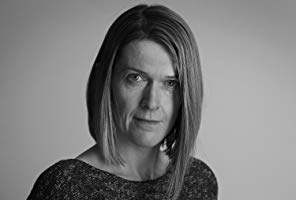 Fiona Mitchell is an award-winning writer and has worked as a journalist for many years. She spent almost three years living in Singapore and now lives in London with her husband and daughter.

Her debut novel The Maid’s Room was published in 2017.

The Swap by Fiona Mitchell is a thought provoking novel that once started you do not want to put down. I was intrigued by the whole concept of this novel and the moral dilemma held within its pages. What would you do if you found out the baby you had given birth to after IVF treatment was not biologically yours? That a mistake had been made and your embryo had been mixed up with another woman’s, so you gave birth to her biological child and she gave birth to yours? I can’t even begin to imagine how horrendous that would feel.

Although Matteo is at first reluctant, Tess is desperate to find out the truth. They had gone to America for gender selective IVF as Tess longed for a daughter, but instead she had given birth to Freddie, a little boy she had struggled to bond with. So when she finds out that a mistake had been made and the other couple, Annie and Carl, had given birth to a daughter, she will stop at nothing to get to know her biological daughter.

On first glance you could be forgiven for thinking that Tess and Matteo have so much more to offer Willow than Annie and Carl do. They’re in a much better financial position and live in a nice house in England, whereas Annie and Carl are from a poor background, only being able to afford IVF treatment due to the generosity of Carl’s mother. But it soon becomes apparent that first impressions are not always the right ones. Tess is increasingly cold towards Freddie and becomes obsessed with having ‘her little girl’ back, and I have to admit I struggled to warm towards her at all during the first half of the book. Annie, on the other hand, is warm and friendly, with an abundance of love to give. She adores Willow and can’t even begin to contemplate losing her little girl to the other woman.

But then, as details emerge of a tragedy in her past, I began to understand why Tess was behaving the way she was. This part of the book was difficult to read for me as my son and his wife went through the same devastating loss that Tess and Matteo suffer, something which we as a family are still feeling the shockwaves from more than seven years later. So my feelings towards Tess changed at this point, as I finally came to understand the motivation behind her actions. As protective as I’d felt of the lovely, warm hearted Annie, all I now wanted to do was enfold Tess in my arms and give her a big hug.

Fiona Mitchell has written a book that really does make you think. She handles some very sensitive subjects incredibly well in The Swap and her beautiful writing draws you in from the outset. The dilemma both families face is not as cut and dried as you might at first think. How could you come to terms with the fact the child you believed was yours was not? Would it change how you felt about them? After all, for three years you’ve brought them up as your own child. You’ve loved them, nurtured them, tucked them in at night and looked after them when they’ve been ill.

As a parent, I know I could never have turned my back on either of my children or indeed my grandchildren. The thought of handing them over to someone else makes my blood run cold. It wouldn’t matter to me that they weren’t biologically mine, I just know deep in my heart I could not let them go.

But… and therein lies the dilemma. How could I go through life knowing my biological child was out there somewhere? My own flesh and blood? And not want to see them? I don’t think I could do that either. So what would be the right thing to do? It really is an impossible situation and one that Fiona Mitchell has explored so well in this powerful, moving and thought provoking book.

A gripping, intriguing and emotive page turner of a read that I would highly recommend.

The Swap by Fiona Mitchell is out to buy now: Amazon UK

Check out what these other bloggers have to say about this book: 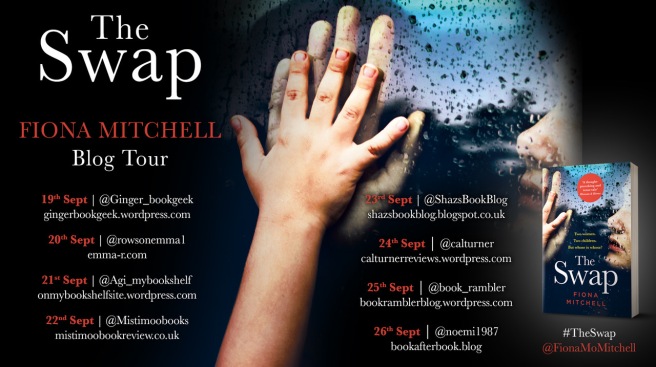