I’m delighted to welcome you today to my stop on the blog tour for Eight Hours From England  by Anthony Quayle, the fourth title in the Imperial War Museum’s Wartime Classics series that are being released to coincide with the 80th Anniversary of the outbreak of World War 2. Thank you to Anne Cater and Angela Martin from IWM for giving me the opportunity to be a part of this special blog tour.

“If poetry was the supreme literary form of the First World War then, as if in riposte, in the Second World War, the English novel came of age. This wonderful series is an exemplary reminder of that fact. Great novels were written about the Second World War and we should not forget them.”
WILLIAM BOYD

‘It’s wonderful to see these four books given a new lease of life because all of them are classic novels from the Second World War written by those who were there, experienced the fear, anguish, pain and excitement first-hand and whose writings really do shine an incredibly vivid light onto what it was like to live and fight through that terrible conflict.’
JAMES HOLLAND, Historian, author and TV Presenter

Originally published to considerable acclaim, these titles were written either during or just after the Second World War and are currently out of print. Each novel is written directly from the author’s own experience and takes the reader right into the heart of the conflict. They all capture the awful absurdity of war and the trauma and chaos of battle as well as some of the fierce loyalties and black humour that can emerge in extraordinary circumstances. Living through a time of great upheaval, as we are today, each wartime story brings the reality of war alive in a vivid and profoundly moving way and is a timely reminder of what the previous generations experienced.

The remarkable IWM Library has an outstanding literary collection and was an integral part of Imperial War Museums from its very beginnings. Alan Jeffreys, (Senior Curator, Second World War, Imperial War Museums) searched the library collection to come up with these four launch titles, all of which deserve a new and wider audience. He has written an introduction to each novel that sets them in context and gives the wider historical background and says, ‘Researching the Wartime Classics has been one of the most enjoyable projects I’ve worked on in my years at IWM. It’s been very exciting rediscovering these fantastic novels and helping to bring them to the wider readership they so deserve’.

Each story speaks strongly to IWM’s remit to tell the stories of those who experienced conflict first hand. They cover diverse fronts and topics – preparations for D-Day and the advance into Normandy; the war in Malaya; London during the Blitz and SOE operations in occupied Europe and each author – three men and a woman – all have fascinating back stories. These are Second World War novels about the truth of war written by those who were actually there.

The Four titles are:

From the City, From the Plough by Alexander Baron – A vivid and moving account of preparations for D- Day and the advance into Normandy. Published in the 75th anniversary year of the D-Day landings, this is based on the author’s first-hand experience of D-Day and has been described by Antony Beevor as ‘undoubtedly one of the very greatest British novels of the Second World War.’

Alexander Baron was a widely acclaimed author and screenwriter and his London novels have a wide following. This was his first novel.

Trial by Battle by David Piper – A quietly shattering and searingly authentic depiction of the claustrophobia of jungle warfare in Malaya described by William Boyd as ‘A tremendous rediscovery of a brilliant novel. Extremely well-written, its effects are both sophisticated and visceral. Remarkable’, and VS Naipaul as ‘one of the most absorbing and painful books about jungle warfare that I have read’ and by Frank Kermode as ‘probably the best English novel to come out of the Second World War.’

David Piper was best known as director of the National Portrait Gallery, the Fitzwilliam Museum in Cambridge and the Ashmolean Museum in Oxford. The novel is based on his time serving with the Indian Army in Malaya where he was captured by the Japanese and spent three years as a POW. His son, Tom Piper, was the designer of the hugely successful Blood Swept Lands and Seas of Red installation of ceramic poppies at the Tower of London to commemorate the First World War Centenary.

Eight Hours from England by Anthony Quayle – A candid account of SOE operations in occupied Europe described by Andrew Roberts as ‘As well as being one of our greatest actors, Anthony Quayle was an intrepid war hero and his autobiographical novel is one of the greatest adventure stories of the Second World War. Beautifully written and full of pathos and authenticity, it brings alive the terrible moral decisions that have to be taken by soldiers under unimaginable pressures in wartime.’

Anthony Quayle was a renowned Shakespearean actor, director and film star and during the Second World War was a Special Operations Executive behind enemy lines in Albania.

Plenty Under the Counter by Kathleen Hewitt – a murder mystery about opportunism and the black market set against the backdrop of London during the Blitz. ‘With a dead body on the first page and a debonair

RAF pilot as the sleuth, this stylish whodunit takes you straight back to Blitzed London and murder most foul. Several plausible suspects, a femme fatale, witty dialogue, memorable scenes and unexpected twists – it boasts everything a great whodunit should have, and more. Andrew Roberts.

Kathleen Hewitt was a British author and playwright who wrote more than 20 novels in her lifetime. She was part of an artistic set in 1930’s London which included Olga Lehman and the poet Roy Campbell.

IWM (Imperial War Museums) tells the story of people who have lived, fought and died in conflicts involving Britain and the Commonwealth since the First World War.

Our unique collections, made up of the everyday and the exceptional, reveal stories of people, places, ideas and events. Using these, we tell vivid personal stories and create powerful physical experiences across our five museums that reflect the realities of war as both a destructive and creative force. We challenge people to look at conflict from different perspectives, enriching their understanding of the causes, course and consequences of war and its impact on people’s lives.

Today’s review is of Eight Hours From England by Anthony Quayle. It is a candid account of Special Operations Executive (SOE) operations in occupied Europe.

It’s the Autumn of 1943 and, after realising that his feelings for his sweetheart are not reciprocated, Major John Overton accepts a posting behind enemy lines in Nazi occupied Albania. On arrival he finds the situation in disarray, but is determined to overcome the geographical challenges and political issues hindering him so he can complete his mission and set up camp. But are the British really there to help? Or do they have their own secret agenda? As he struggles to finish his mission, Major Overton finds himself contemplating loyalty, comradeship and his own future once the war is over.

Based on the author’s own wartime experiences with the SOE, this new edition of the 1945 classic includes a contextual introduction from the IWM which sheds new light on the fascinating events that inspired its author to write such a beautiful and moving fictional account of his wartime experiences.

As with From the City, From the Plough and Trial By Battle, the first two books I reviewed, Eight Hours From England is a wartime masterpiece that deserves to be read.  Each book highlights a different aspect of World War 2 and I’m so pleased that in re-releasing these books the IWM are introducing all four authors to a brand new audience.

I feel privileged to have been given the opportunity to read and review these outstanding wartime classics to help commemorate the 80th Anniversary of the outbreak of World War 2. All three that I’ve had the pleasure of reviewing have been incredibly moving and authentic portrayals of life during wartime, with very real and believable characters that are brought vividly to life by the skilful penmanship of these talented authors. Largely biographical, they are a timely reminder of a bygone era that should never be forgotten.

Follow along with the blog tour to see what these other bloggers have to say about this outstanding wartime classic: 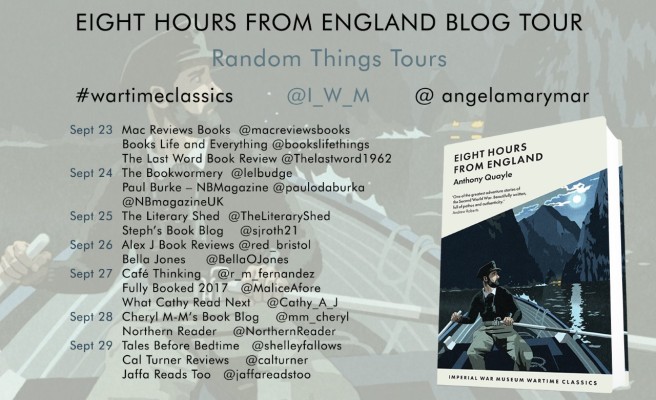