I’m delighted to welcome you to my stop on the blog tour for Sins of the Fathers by Les Cowan.
I’m thrilled to be sharing an extract from this latest installment of the David Hildago series of books as part of the blog tour for Midas Books. Thank you to Amber Choudhary and the publisher for giving me the opportunity to share this extract with you today.
About the book:

Father Ramón feels no guilt for his crimes. He craves revenge. Hidalgo is in danger…

Father Ramón was a priest with a problem. How can a normal healthy young man cope with both the demands of the priesthood and his attraction to women? Appealing to the bishop doesn’t help. Do what you must but make sure I don’t find out, was the astonishing reply. Fifteen years later, Ramón comes out of prison. Instead of feeling guilt and remorse, he is now bent on revenge against those who testified against his shocking exploitation of children. Most are easy to find but there is one last piece missing in his puzzle: Andrea has moved to Edinburgh. David Hidalgo continues to pastor his church. Nowadays, this includes an English chat group for the many young people leaving Spain and looking for work in Edinburgh, people like Andrea. As Andrea slowly realises her past has terrifyingly become her present, once again David Hidalgo finds himself in the middle of a problem he wasn’t looking for. Can David help halt Ramón’s revenge or will there be further casualties? 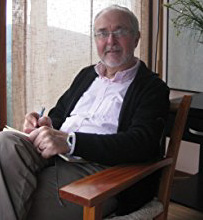 Les Cowan is a crime and thriller novelist from Scotland. He graduated from Edinburgh University with a degree in English Language and Literature and has worked in the criminal justice system. Currently based in Orkney, Les has lived in Madrid, Edinburgh and Galicia, all of which are locations brought to life in his writing. His previous novels featuring David Hidalgo includeBenefit of the Doubt and All That Glitters.

Sins of the Fathers

Nothing about the outermost security door had changed in the last seven years. Maybe a dribble of oil or a lick of paint – nothing you’d notice. The mechanism was as robust and secure as it had ever been. Still, today, the metallic clang as it slammed shut was totally different. The sound of a door locking you in is different from one that opens to let you through.

The preliminaries had been completed right after breakfast, his few personal possessions returned and signed for, a shower, a change of clothing, then the governor’s office. Governor Daniel Lopez was not a brutal man and tried to make encouraging remarks to all the men about to rejoin a world they might have left five, ten or even twenty years before. He forced himself to be scrupulously fair. Whoever the criminal, whatever the crime – murder, rape, fraud, armed robbery, even terror attacks – they all got their fullten minutes in a comfortable chair with a decent cup of coffee. But this morning he just couldn’t bring himself to do it. The file of reports in front of him seemed to show a model prisoner who had paid his debt and was ready to rejoin society. Excellent conduct. Polite to officers and professionals. No big fuss about guilt, innocence or wrongful conviction. Fully engaged in the prison’s education programme, particularly given that he certainly wouldn’t be going back to his former profession. In fact, he had shown a remarkable aptitude for the computer skills course and not only passed all the modules but several times had repaired the education department’s computers and even improved internet access and record-keeping.

It all looked perfect but Lopez simply couldn’t get past the conviction sheet uppermost in the file. He was used to shocking details but had never been able to get his head around this one. How was it possible? How could a man betray a trust so grievously and not show even a twinge of remorse? The prisoner was kept standing as Lopez scanned the salient points yet again for some sign of progress, some acknowledgment of the wrong and harm done, some indication of a change of heart that would bode well for the future. After all, that was the key. New skills, improved self-confidence, even supportive outside contacts – all important, but without the desire to be different they had little impact. So did the man in front of him show any sign of a desire to be different? Lopez signed and accepted there was not a shred of evidence of it. So the prisoner was kept standing. No friendly chat, no café con leche, and no avuncular advice. He abandoned the normal pep talk and said exactly what was on his mind. Then he regretted being so unprofessional. In any case, it seemed to make no more impression now than had the many counselors and psychologists before him, according to the file. The prisoner simply kept looking ahead, showing no emotion, and did not respond in anyway.

For the man standing on the worn patch of parquet in front of the desk, he had more or less expected something like this and let it washover him. He had heard it all before. Let them think what they wanted. The only thing that mattered was that the metallic clang was behind him now instead of in front. It had been a long time coming. Of course he’d used the time as much to his advantage as he could while studiously ignoring all the counsellors, psychologists, and social workers they tried to throw at him. He had turned to the library first but was disappointed to get through all the worthwhile reading in less than a month. There had followed a desperate time of nothingness, when life had been reduced to eating, sleeping, staring at the walls, and counting days. Then one Monday morning, Sandra, the cheerful, optimistic, well-intentioned education officer, had indesperation suggested an IT course after finally accepting that woodwork and pottery were achieving nothing. He’d started with little expectation, just to take up a few more daylight hours, but found to his surprise that it fitted exactly his type of brain. It was cold, precise, logical. Emotions were irrelevant and there was no need for psychobabble about “how it made you feel”. But that didn’t make it mechanical. It was a science but also an art. The science was getting the right answer, the art was in doing it in the most elegant, economical, and graceful way. He found it natural and raced through the modules before branching off into much more interesting investigations of his own.

Standing patient and silent in front of Lopez’ tirade, he wondered what the governor would say if some of his last steamy email to Rosa from the admin office were to be quoted back to him. Or better still, if it was shared with Señora Lopez, enjoying a comfortable life in the suburbs while her husband pretended to be off to another conference but was in reality between the sheets with a girl half his age in a cosy little piso paid for out ofthe half of his salary she didn’t even know existed. He smiled slightly at the thought and got another rollicking for it. It was a nest egg for a rainy day but after this maybe he’d cash it in a bit early. Finally, Lopez ran out of energy and told the prisoner to pick up his case and get out of his sight. That suited both parties fine.

Sins of the Fathers by Les Cowan is available to buy now: Amazon UK