I’m  excited to welcome you today to my stop on the blog tour for The Pursuit of William Abbey by Claire North. Thank you to Tracy Fenton and Orbit Books for giving me the opportunity to read and review this fantastic book. 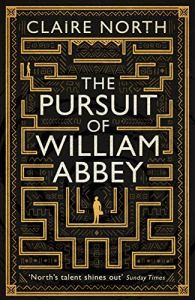 From the award-winning and bestselling author of The First Fifteen Lives of Harry August and 84K comes a powerful new novel that examines how the choices we make can haunt us forever . . .

South Africa, 1884. William Abbey, an English doctor, watches white colonists lynch a Zulu child. As the boy dies, his mother curses William: wherever he goes, the shadow of her son will follow him. It will never stop, never rest. It can cross oceans and mountains. And if it catches him, the person he loves most in the world will die . . .

But to those in power, William’s curse might be a blessing, and as the world slides towards war, William must decide what he’s willing to sacrifice in order to survive.

Moving, thought-provoking and utterly gripping, Claire North’s extraordinary new novel proves again that she is one of the most original and innovative voices in modern fiction. 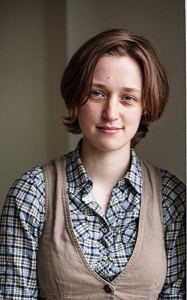 Claire North is a pseudonym for British author Catherine Webb. The First Fifteen Lives of Harry August was her first novel published under the Claire North name, and was one of the fastest-selling new SFF titles of the last ten years. It was selected for the Richard and Judy Book Club, the Radio 2 Book Club and the Waterstones Book Club promotions.

Her next novel Touch was published in 2015 to widespread critical acclaim and was described by the Independent as ‘little short of a masterpiece’.

Catherine currently works as a theatre lighting designer and is a fan of big cities, urban magic, Thai food and graffiti-spotting. She lives in London.

The Pursuit of William Abbey is yet another fantastic and thought provoking read by Claire North. Opening in 1917, France, against the backdrop of World War 1, Dr William Abbey tells his unnerving story to Sister Ellis as the gunfire outside draws ever closer, alongside the shadow of Langa, the young boy cursed to follow William wherever he goes.

William’s story begins in 1884 in South Africa, in the tiny town of Natal. He watches, too scared to even move, as a gang of white colonists lynch Langa, a young Zulu child, to death in front of him. Langa’s mother, distraught with grief, curses William as her young son takes his last breath in her arms. As a privileged white man, William stood by and did nothing as Langa was brutally murdered. And now he must pay the price.

From that day forward the shadow of Langa has followed him wherever he goes, never stopping, not even for a minute. It can cross oceans and mountains, never tiring in its mission to haunt him for the rest of his days. And if it catches him? The person he loves most in the world will die.

William is now a truth-speaker, someone who can see into the souls of others, but not into his own. He can see deep inside their hearts, knowing exactly who they are. As the shadow of Langa draws ever nearer, William sees the truth inside of people, the feeling becoming stronger as Langa approaches, allowing him to see the deepest, darkest secrets they hold within their hearts. If Langa reaches Abbey and touches him, the person he loves most in the world will die, repeating over and over again until everyone William holds dear is dead. The shadow of Langa will haunt him forever, so William must live a lonely life, trying to outmanoeuvre the curse of a vengeful mother, doing all he can to protect those he loves.

But what is a curse to him is seen as a blessing by those in power, and now William must decide what he’s willing to sacrifice in order to survive. There are others with the same curse as William, but not everyone sees it as the curse it is, but more like something that can be used to their own advantage. William is not a brave person, but his new role as truth-speaker opens his eyes to the world around him and enables him to see beyond the outward exterior and into the hearts and souls of the people he encounters on his dark and lonely journey.

There is so much more I could say about this fascinating and complex story, but to do so would give too much away, and this is a story you need to read and discover for yourself. It’s a beautifully written and intricately crafted book that takes you on a harrowing journey of mystery and suspense, the tension always there, bubbling away beneath the surface as William’s thought provoking story unfolds before you.

I loved everything about this book. Claire North is such a talented writer, her words drawing you in and painting a vivid picture of the world William Abbey finds himself in. I had no idea what to expect when I started The Pursuit of William Abbey. All I knew was the small amount of information the blurb outlined and that it was by an author whose previous work I have loved, but it completely blew my expectations out of the water. The author is a born storyteller and I ate up every word of this devastatingly brilliant book.

I don’t give star ratings on my blog, but if I did The Pursuit of William Abbey would easily surpass the most stars I could possibly give. What a cracking read! Highly recommended.

The Pursuit of William Abbey by Claire North is available to buy now: Amazon UK 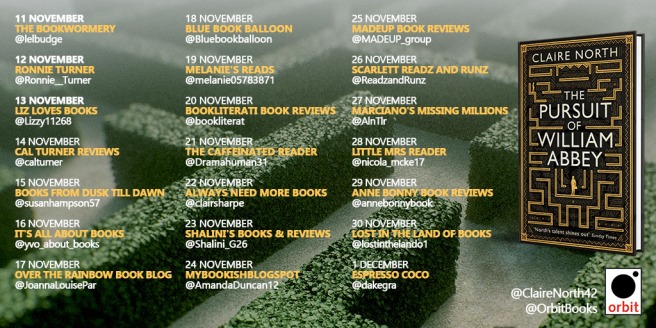