I’m pleased to welcome you today to my stop on the blog tour for psychological thriller Haven’t They Grown by Sophie Hannah. Thank you to Jenny Platt from Hodder & Stoughton for giving me the opportunity to read and review this book. 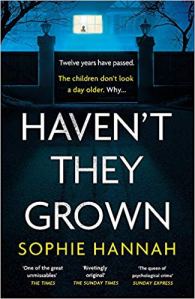 All Beth has to do is drive her son to his Under-14s away match, watch him play, and bring him home.

Just because she knows that her former best friend lives near the football ground, that doesn’t mean she has to drive past her house and try to catch a glimpse of her. Why would Beth do that, and risk dredging up painful memories? She hasn’t seen Flora Braid for twelve years.

But she can’t resist. She parks outside Flora’s house and watches from across the road as Flora and her children, Thomas and Emily, step out of the car. Except…

Flora looks the same, only older – just as Beth would have expected. It’s the children that are the problem. Twelve years ago, Thomas and Emily Braid were five and three years old. Today, they look precisely as they did then. They are still five and three. They are Thomas and Emily without a doubt – Beth hears Flora call them by their names – but they haven’t changed at all.
They are no taller, no older.

Why haven’t they grown? 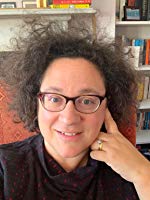 Sophie Hannah is an internationally bestselling crime fiction writer whose books have sold millions of copies worldwide. Her crime novels have been translated into 49 languages and published in 51 countries. Her psychological thriller The Carrier won the Crime Thriller of the Year Award at the 2013 UK National Book Awards. In 2014 and 2016, Sophie published The Monogram Murders and Closed Casket, the first new Hercule Poirot mysteries since Agatha Christie’s death, both of which were national and international bestsellers. She went on to publish a third, The Mystery of Three Quarters in 2018 which was an instant bestseller, and her fourth Poirot novel, The Killings at Kingfisher Hill will be published in August 2020.

Sophie helped to create a Master’s Degree in Crime and Thriller Writing at the University of Cambridge, for which she is the main teacher and Course Director. She is also the founder of the Dream Author Coaching Programme for writers which launched in September 2019.

Sophie is also an award-winning, bestselling poet, and her poetry is studied at GCSE level across the UK. She has co-written two murder mystery musicals with composer Annette Armitage: The Mystery of Mr. E and Work Experience. She has written a self-help book called How To Hold a Grudge: From Resentment to Contentment – The Power of Grudges to Transform Your Life, and hosts the How to Hold a Grudge podcast.

Sophie lives with her husband, children and dog in Cambridge, where she is an Honorary Fellow of Lucy Cavendish College.

I was intrigued by this book from the outset. How could it be possible that twelve years have passed but two children have remained the same? I had all sorts of scenarios going around in my head, but none of them could have prepared me for the truth when it was finally revealed.

Beth is prepared to go to any lengths to uncover the truth of why her former best friend’s children haven’t aged a day since the last time she saw them. Her husband thinks she needs to let it go, but her teenage daughter Zannah is as intrigued as her mother, encouraging Beth to go to bizarre lengths in her search for the truth.

Haven’t They Grown is a suspense filled tale with twists and turns galore as the reality of Flora’s situation is slowly uncovered. Although you need to suspend your disbelief to a certain degree, I enjoyed what was a surprising and well written psychological thriller that held its cards close to its chest until the final twist of the tale was revealed.

Haven’t They Grown by Sophie Hannah is available to buy now: Amazon UK