I’m thrilled to welcome you today to my stop on the blog tour for the brilliant and scary Beast by Matt Wesolowski, fourth in the popular Six Stories series of books. Thank you to Anne Cater and Orenda Books for giving me the opportunity to read and review this outstanding book. 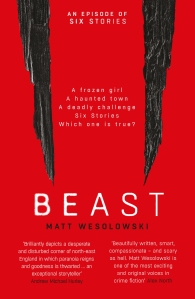 Elusive online journalist Scott King examines the chilling case of a young vlogger found frozen to death in the legendary local ‘vampire tower’, in another explosive episode of Six Stories…

In the wake of the ‘Beast from the East’ cold snap that ravaged the UK in 2018, a grisly discovery was made in a ruin on the Northumbrian coast. Twenty-four-year-old Vlogger, Elizabeth Barton, had been barricaded inside what locals refer to as ‘The Vampire Tower’, where she was later found frozen to death. Three young men, part of an alleged ‘cult’, were convicted of this terrible crime, which they described as a ‘prank gone wrong.’

However, in the small town of Ergarth, questions have been raised about the nature of Elizabeth Barton’s death and whether the three convicted youths were even responsible. Elusive online journalist Scott King speaks to six witnesses people who knew both the victim and the three killers to peer beneath the surface of the case. He uncovers whispers of a shocking online craze that held the young of Ergarth in its thrall and drove them to escalate a series of pranks in the name of internet fame. He hears of an abattoir on the edge of town, which held more than simple slaughter behind its walls, the tragic and chilling legend of the ‘Ergarth Vampire’…

Both a compulsive, taut and terrifying thriller, and a bleak and distressing look at modern society’s desperation for attention, Beast will unveil a darkness from which you may never return… 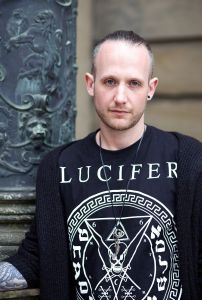 Matt Wesolowski is an author from Newcastle-Upon-Tyne in the UK. He is an English tutor for young people in care.

Wesolowski started his writing career in horror and was a winner of the Pitch Perfect competition at ‘Bloody Scotland’; Crime Writing Festival 2015. His subsequent debut crime novel ‘Six Stories’ was published by Orenda Books in the spring of 2016 with follow-up ‘Hydra’ published in the winter of 2017 and ‘Changeling’ in 2018.

‘Six Stories’ has been optioned by a major Hollywood studio and the third book in the series, ‘Changeling’ was longlisted for the Theakston Old Peculier Crime Novel of the Year, 2019 Amazon Publishing Readers’ Award for Best Thriller and Best Independent Voice.

I must begin this review with a confession:

This is my first foray into the world of Scott King and his Six Stories podcast.

I know! Why has it taken me so long?! I own all three previous books in the series, but haven’t had a chance to read them yet, even though they’ve been on my TBR list since I first heard about them. But wow! After reading this fourth instalment of the popular Six Stories, this fantastic series of books will be moving to the top of my pile forthwith!

Oh my goodness, where do I even begin?! Wow, what a unique and original book this is. Unlike anything I’ve ever read before, Matt Wesolowski has created a fascinating and gripping world that from the very beginning sucks you into the chilling story of a young vlogger found frozen to death in a legendary local ‘vampire tower’. Discovered in the wake of the ‘Beast from the East’ cold snap of 2018, 24 year old vlogger Elizabeth Barton had been barricaded inside the tower and left to die. Three young men have been convicted of this horrific crime, which they describe as a ‘prank gone wrong’. But now questions are being asked and online journalist Scott King begins his own examination into what really happened to Elizabeth Barton.

From the opening paragraph right through to its chilling conclusion, Beast grabbed me by the throat and didn’t let go. Told in the style of a podcast, Matt Wesolowski’s ingenious writing instantly transported me to the freezing cold winter of 2018. Scott King speaks to six witnesses who knew both the victim and the killers, delving beneath the surface of this strange and terrifying case. What he uncovers is even more shocking than he could ever have expected. Not only is there the mystery of the ‘Ergarth Vampire’ legend and the many sightings the people of Ergarth have witnessed over the years, but there is also talk of an online ‘cult’ that takes a close look at the modern day obsession with instant fame and gratification. Could there be any truth to any of the stories? Or is the Ergarth Vampire just the product of a story evolving with time and a vivid imagination?

But then Scott discovers a chilling online craze that could possibly hold the answer to Elizabeth Barton’s brutal murder. With tales of a cult, macabre rituals and an extreme series of pranks designed to bring instant internet fame to those taking part, this is a compulsive read that chilled me to the core. I’m not even sure which element of the story chilled me more: the spine tingling tale of the Ergarth Vampire or the entirely believable and shocking vlogger craze that the young people of Ergarth became so obsessed with. It shines a spotlight on just how powerful and influencial the internet has become, taking people in directions they would never have even contemplated before. A scary but very real side to the story that really does make you think.

Beast is a brilliantly written, superbly plotted book that completely blew me away. With a story that kept me turning the pages long into the night, it is a gripping and unpredictable read that had me on the edge of my seat throughout. And although this was my first Six Stories read and could easily be read as a standalone, I can’t wait to go back to the beginning to see where it all started! Beast is a book that felt so real I could almost believe it had really happened, the story so vividly told it felt like I was actually there, the cold and eeriness of Ergarth all around me, chilling me to the bone.

And so begins my new obsession.

Matt Wesolowski‘s writing is original, compelling, easy to read and has a uniqueness to it that will keep me coming back for more time and time again. Highly recommended.