I’m pleased to welcome you today to my stop on the blog tour for The Hidden Girl and Other Stories by award winning author Ken Liu. Thank you to Amber Choudhary and Midas Books for giving me the opportunity to share an extract of this wonderful book with you today.

From a Tang Dynasty legend of a young girl trained as an assassin with the ability to skip between dimensions on a secluded mountain sanctuary to a space colony called Nova Pacifica that reflects on a post-apocalyptic world of the American Empire and ‘Moonwalker’ Neil Armstrong, The Hidden Girl and Other Stories is laced with  depictions of silkpunk fantasy, Sci-Fi and old Chinese folklore, wrapped up in a mesmerising genre-bending collection of short stories.

Ken Liu is an American author and the winner of the Nebula, Hugo, Locus, World Fantasy, Sidewise, and Science Fiction & Fantasy Translation Awards. He emigrated to the US from China at age of 11 and graduated from Harvard with a degree in English Literature and Computer Science. Prior to becoming a full-time writer, Ken worked as a software engineer, corporate lawyer, and litigation consultant. His work includes the epic fantasy series, The Dandelion Dynasty and his debut collection, The Paper Menagerie and Other Stories. His short story Good Hunting was adapted for an episode for Netflix’s science fiction web series Love, Death and Robots.

The Hidden Girl and Other Stories by Ken Liu

Ms. Coron pointed to the screen-board, on which she had typedout a bit of code.

Ona watched her Teacher turn around. The helmetless Ms.Coron wore a dress that exposed the skin of her arms and legs in away that she had taught the children was beautiful and natural. Intellectually, Ona understood that the frigid air in the classroom, cold enough to give her and the other children hypothermia evenwith brief exposure, was perfectly suited to the Teachers. But she couldn’t help shivering at the sight. The airtight heat-suit scraped over Ona’s scales, and the rustling noise reverberated loudly in her helmet.

Ona wished she could call on a smaller version of herself to solve her problems. She imagined that nested inside her was Obedient Ona, who enjoyed diagramming Classical Computer Languages and studying prosody in Archaic English. That would free her up to focus on the mysterious alien civilization of Nova Pacifica, the long dead original inhabitants of this planet.

The heads of the other children in the classroom turned as one to look at her, the golden glint from the scales on their faces dazzling even through the two layers of glass in their and Ona’s helmets.

Ona cursed herself silently. Apparently, instead of Obedient Ona, she had somehow called on Loudmouth Ona, who was always getting her in trouble.

Ona noticed that Ms. Coron’s naked face was particularly made up today, but her lips, painted bright red, almost disappeared into a thin line as she tried to maintain her smile.

“We study classical languages to acquire the habits of mind ofthe ancients,” Ms. Coron said. “You must know where you came from.”

The way she said “you” let Ona know that she didn’t mean just her in particular, but all the children of the colony, NovaPacifica. With their scaled skin, their heat-tolerant organs andvessels, their six-lobed lungs—all engineered based on models from the local fauna—the children’s bodies incorporated an alien biochemistry so that they could breathe the air outside the Dome and survive on this hot, poisonous planet.

Ona knew she should shut up, but—just like the recursive calls in Ms. Coron’s diagram had to return up the call stack—she couldn’t keep down Loudmouth Ona. “I know where I came from: I was designed on a computer, grown in a vat, and raised in the glass nursery with the air from outside pumped in.”

Ms. Coron softened her voice. “Oh, Ona, that’s not . . . notwhat I meant. Nova Pacifica is too far from the home worlds, and they won’t be sending a rescue ship because they don’t know that we survived the wormhole and we’re stranded here on the other side of the galaxy. You’ll never see the beautiful floating islands of Tai-Winn or the glorious skyways of Pele, the elegant city-treesof Pollen, or the busy data warrens of Tiron—you’ve been cut off from your heritage, from the rest of humanity.”

Hearing—for the millionth time—these vague legends of the wonders that she’d been deprived of made the scales on Ona’sback stand up. She hated the condescension.

“But we’re not human! You made us in the image of the plants and animals living here. The dead aliens are more like us than you!”

Ms. Coron stared at Ona, and Ona saw that she had hit upon a truth Ms. Coron didn’t want to admit, even to herself. In the Teacher’s eyes, the children would never be good enough, never be fully human, though they were the future of humanity on this inhospitable planet. Ms. Coron took a deep breath and went on as if nothing had happened. “Today is the Day of Remembrance, and I’m sure you’ll impress all the Teachers with yourpresentations later. But let’s finish our lesson first.

“To compute the n-th term, the recursive function calls itself to compute the (n–1)th term and the (n–2)th term, so that they could be added together, each time going back earlier in the sequence, solving earlier versions of the same problem. . . .

“The past,” Ms. Coron continued, “thus accumulating bit by bit through recursion, becomes the future.”

The bell rang, and class was finally over.

The Hidden Girl and Other Stories by Ken Liu is available to buy now: Amazon UK 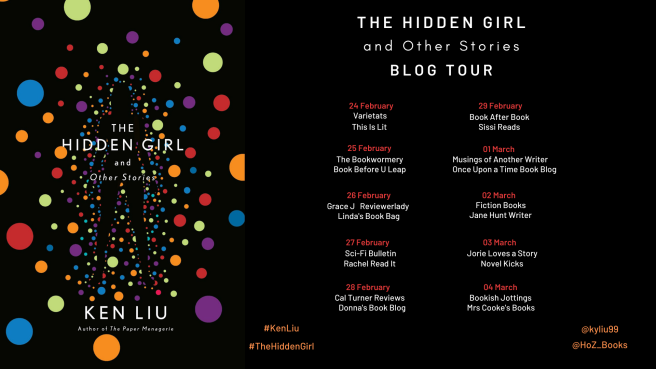