I’m excited to welcome you today to my stop on the blog tour for Fern Britton’s incredible historical saga Daughters of Cornwall. Thank you to Anne Cater and Harper Collins or giving me the opportunity to read and review this beautifully written and moving book. 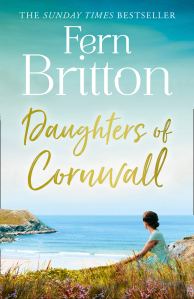 1918.The Great War is over, and Clara Carter has boarded a train bound for Cornwall – to meet a family that would once have been hers. But they must never discover her secret…

1939. Hannah has always been curious about her mother’s mysterious past, but the outbreak of the Second World War casts everything in a new light. As the bombs begin to fall, Hannah and her brothers are determined to do their bit for the war effort – whatever the cost.

2020. Caroline has long been the keeper of her family’s secrets. But now, with her own daughter needing her more than ever, it’s time to tell the truth – to show Natalie that she comes from a long line of women who have weathered the storms of life, as hardy and proud as the rugged Cornish coastline…

From the Sunday Times bestselling author comes a sweeping, epic novel of mothers and daughters, secrets and lies, and a love that lasts a lifetime… 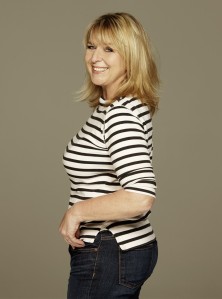 Born in London, into a theatrical family, Fern started her professional life as a stage manager. Theatre life was great fun but within three years, in 1980, she graduated to television and became a presenter on Westward Television. Here she achieved her ambition of living in Cornwall. Since then television has been her home. She spent 14 years as a journalist before presenting Ready, Steady, Cook for the BBC. This Morning for ITV came next where she won several awards and became a household name. Her interview programme Fern Britton Meets had guests including Tony Blair, Archbishop Desmond Tutu, Dolly Parton and Cliff Richard. Fern presented The Big Allotment Challenge (BBC2), For What It’s Worth (BBC1), Culinary Genius with Gordon Ramsay (ITV)

Fern’s novels are all set in her beloved Cornwall. Her books are cherished for their warmth, wit and wisdom, and have won her legions of loyal readers. Fern was a judge for the Costa Book of the Year Award and a supporter of the Reading Agency, promoting literacy and reading.

Fern turned her talents to acting last year when she starred as Marie in Gary Barlow and Tim Firth’s award-winning musical Calendar Girls.

Fern has twin sons, two daughters and lives in Cornwall in a house full of good food, wine, family, friends and gardening books. She has a motor cycle licence, an honorary doctorate for services to broadcasting and charity, and is a member of Mensa!

Daughters of Cornwall is the first book I’ve read by critically acclaimed author and television presenter Fern Britton, but it most definitely won’t be my last. I was drawn into the story from the very first page, becoming completely absorbed in the lives of Clara, Hannah and Caroline, as they navigate everything from the First World War right up until the present day.

I wasn’t sure what to expect when I started this epic historical saga, but the fact it was set in Cornwall (my favourite place in the world) drew me to it even before I started reading it. But wow, what a beautifully written, moving and authentic story it is! Inspired by the author’s own grandmother, Daughters of Cornwall tells the story of three generations of strong women, beginning with Clara in 1918 at the end of the First World War. Told partly by Clara herself and partly by Bertie, the love of her life, it begins as Clara boards a train to Cornwall, on her way to meet a family that would once have been hers. But Clara has a secret. One that they must never know…

We then move forward to 1939 and Hannah as she returns home from Penang in Malaya, where she and her brother Edward were born. Hannah has always been curious about her mother’s mysterious past, but the outbreak of the Second World War is all encompassing, taking Hannah down a path she would never have expected, ultimately leading to the birth of her illegitimate daughter, Caroline.

In the present day, Caroline has received a mysterious trunk containing secrets from the past that are about to see the light of day at last. Caroline has long been the keeper of her family’s secrets, but now is the time for the truth to be known, and for Caroline to show her own daughter the long line of incredible women who paved the way before her. Strong and resilient women, whose proud voices deserve to be heard at long last.

Daughters of Cornwall is a beautifully written book that encompasses everything from the horror of two world wars to the hardships of being a woman in a time very different to the one we live in today. Bertie’s letters to Clara add an almost palpable poignancy to the tale, the horrors of war clear in every word. As is the obvious love and devotion he feels for his beloved Clara as he writes to her from the mud filled trenches of World War One, making my heart clench at the heartbreaking devastation of it all.

Inspired by the life of her grandmother, Fern Britton has written a powerful and emotive story of three generations of strong and resourceful women as they navigate their way through a life that is very often tainted by hardship and heartbreak. I loved every word of this incredible book and can’t even begin to praise it highly enough. A beautiful and moving story of love, loss, family and long hidden secrets, Daughters of Cornwall is a book steeped in history that vividly portrays the reality of the different eras in which it is set.

Daughters of Cornwall is very different to what I expected it to be, with an authenticity  to it that I must admit took me by surprise. A breathtaking story that spans over a hundred years, it is a book I would highly recommend. Outstanding!

Daughters of Cornwall by Fern Britton is available to purchase now: Amazon UK

Follow along with the blog tour to see what these other fabulous bloggers have to say about this wonderful book: 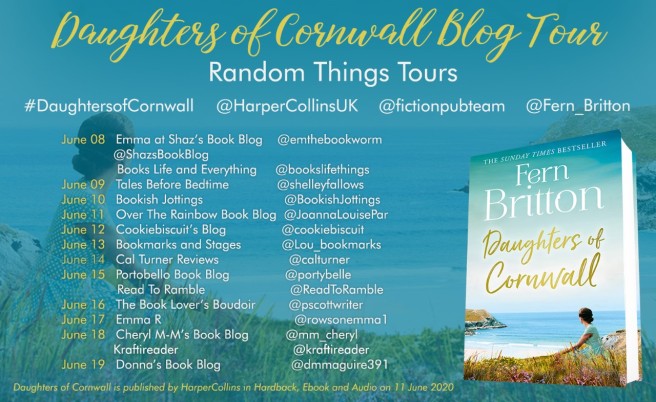