I’m delighted to welcome you today to my stop on the blog tour for psychological thriller The Lies You Told by Harriet Tyce. Thank you to Tracy Fenton and Wildfire Books for giving me the opportunity to read and review this fabulous book. 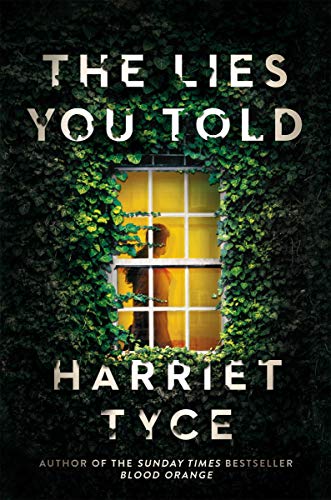 Shocking, dark, addictive – The Lies We Told is the compulsive new thriller from Harriet Tyce, bestselling author of Blood Orange.

Sadie loves her daughter and will do anything to keep her safe.

She can’t tell her why they had to leave home so quickly – or why Robin’s father won’t be coming with them to London.

She can’t tell her why she hates being back in her dead mother’s house, with its ivy-covered walls and its poisonous memories.

And she can’t tell her the truth about the school Robin’s set to start at – a school that doesn’t welcome newcomers.

Sadie just wants to get their lives back on track.

But even lies with the best intentions can have deadly consequences…

Harriet Tyce grew up in Edinburgh and studied English at Oxford University before doing a law conversion course at City University. She practised as a criminal barrister in London for nearly a decade, and recently completed an MA in Creative Writing – Crime Fiction at the University of East Anglia.

She lives in north London. Her first novel, Blood Orange, published in 2019 to huge critical acclaim.

The Lies You Told by Harriet Tyce is a dark and compelling read that will have you gripped from beginning to end. It’s a twisted thriller that starts off slowly, building the tension little by little as the story gradually unfolds. A compulsive read that’s as addictive as it is thrilling, I wasn’t sure exactly where it was going to lead when I started it. But oh my goodness, what a shockingly dark and chilling page turner of a ride it turned out to be!

Fleeing to her dead mother’s house from America, Sadie will do anything to keep her daughter safe. But she can’t tell Robin why they had to leave so suddenly, or why she hates being back in her childhood home with it’s poisonous memories. In fact, she can’t tell Robin much at all. All she wants is for their lives to get back to some kind of normality. But lies, even when they’re being told with the best of intentions, have a habit of being found out. And sometimes the consequences of those lies can be deadly…

With characterisation that’s second to none, this is a psychological thriller unlike any I’ve ever read before. I love a book that starts off slowly, the tension and suspense building until it becomes almost palpable, bringing me closer and closer to the edge of my seat, so desperate was I to find out where this dark and twisted tale was going to take me next.

I can’t say too much more about the plot for fear of spoilers, so all I will say is that Harriet Tyce has written a dark and disturbing thriller that really did keep me guessing throughout. The Lies You Told is full of intrigue and suspense, with a clever and intricately woven plot that slowly increases the tension little by little as the story moves ever closer to its final, shocking denouement that I honestly did not see coming!

As one of the very few people who still hasn’t read Blood Orange, this is the first book I’ve read by Harriet Tyce but it most definitely won’t be my last. A dark, twisted, shocking and compelling psychological thriller that I would highly recommend.

The Lies You Told by Harriet Tyce is available to buy now: Amazon UK

Check out what these other fab bloggers have to say about this book: