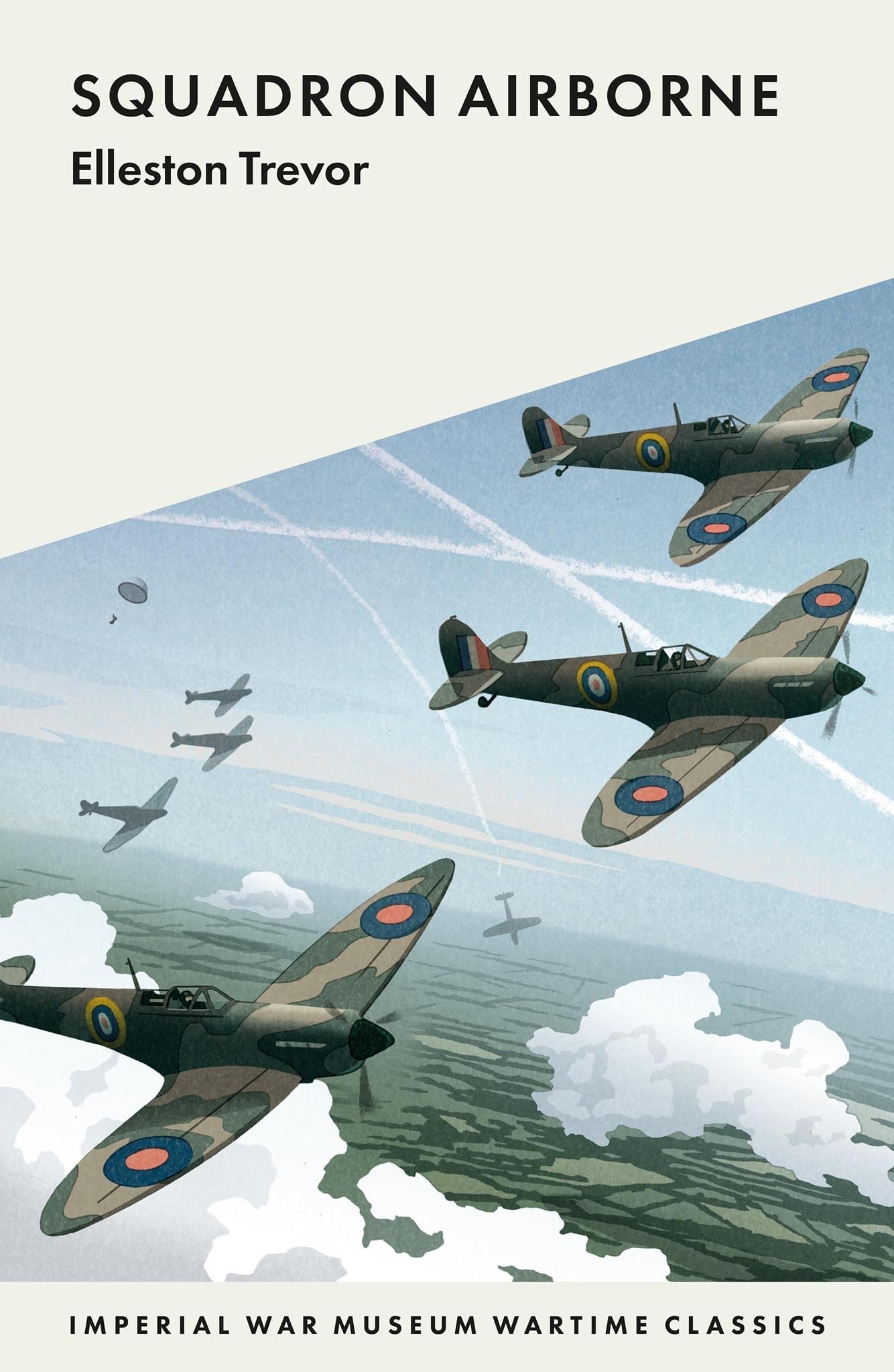 Squadron Airborne by Elleston Trevor – is due to be published to coincide with Battle of Britain Day.

It’s a fantastically gripping novel of one week on a fictional fighter station during the height of the battle.
It shows not just the terrifying reality of the battles in the skies but how the whole operation depended on the thousands of ground-crew and other staff who ensured that the pilots could take to the air time and time again.
The author (real name Trevor Dudley-Smith) was an RAF Flight Engineer during that time.
As the post-war testimonies of so many pilots reveal, it took unstinting, backbreaking, round-the-clock labour to re-arm, refuel, repair and return aircraft to the fight.
Success was thanks to a vast collective effort with the squadron the epitome of that teamwork.
The novel evokes the frenetic nature of that summer brilliantly, and is very moving in places.
The author was most famous for his 1964 novel Flight of the Phoenix which was made into two Hollywood films.
About the author:

Elleston Trevor (Trevor Dudley-Smith) was a prolific author who wrote under several pseudonyms, publishing over 100 books in his lifetime.
He is perhaps best known for his Quiller series of spy novels and his 1964 novel The Flight of the Phoenix, which has been adapted into two Hollywood films.
Extract from the Introduction to Squadron Airborne:

The literary legacy of the First World War was a proliferation of war novels, with an explosion of the genre in the late 1920s. Erich Maria Remarque’s All Quiet on the Western Front was a bestseller and was made into a Hollywood film in 1930. In the same year, Siegfried Sassoon’s Memoirs of an Infantry Officer sold 24,000 copies. Generations of school children have grown up on a diet of Wilfred Owen’s poetry and the novels of Sassoon. Yet the novels of the Second World War – or certainly those written by individuals who had first-hand experience of that war – are often unfairly overlooked.

Squadron Airborne by Elleston Trevor (Trevor Dudley-Smith writing under a pseudonym) is a fine example of this first-hand experience translated into a fictional work. Based on the author’s experience as an engineer in the Royal Air Force (RAF), the book concerns life on a fictional airfield during the height of the Battle of Britain in the summer of 1940, revolving around the experience of the titular squadron. The action of this fast-paced, enjoyable novel takes place over less than a week and wonderfully depicts the frantic nature of that summer. First published in 1955, it is one of Trevor’s earlier works – on first reading, it is perhaps no surprise to learn that he went on to become a prolific author who enjoyed some success in the mystery and fiction field, writing under nearly a dozen pseudonyms in a long literary career.

The summer of 1940 and the Battle of Britain have become etched into the collective British memory of the Second World War. It was this pivotal year in which fears of a German invasion (codename: Operation ‘Sealion’) were at their peak. Germany planned to gain air supremacy in preparation for the invasion, launching a sustained air assault across southern England which became known as the Battle of Britain, and raged from July to October of that year. The battle eventually culminated in a British defensive victory, which was then followed by an assault on the civilian population during the Blitz.

Responsible for success in the Battle of Britain, and for ensuring that the invasion would not come, were the pilots of RAF Fighter Command – and with them the thousands more who ensured they could take to the skies time and again. During the conflict, their best guess was that their chances against the perceived strength of the Luftwaffe were slim. We now know that despite this prevailing feeling (as depicted in the novel), the RAF was in fact in a superb position to resist the might of the German air force. It was well led, well-supplied, and expertly deployed. It managed its resources better than the Luftwaffe: while German forces declined, the RAF actually grew in strength as the battle progressed. Victory was based on the hard-edged application of science, on patient and considered logistics, systems and processes – a solid foundation which ensured that individual and collective acts of bravery were not wasted. Britain was indeed not invaded in 1940, and after sustained German losses the invasion plans were quietly postponed and dropped by the Nazis as they turned their attention to the ill-fated campaign on the Eastern Front.

However during that summer itself, of course, the pilots of Fighter Command, likewise the characters in this novel, did not have the benefit of hindsight. The desperate nature of the battle – the relentless scrambles, being on ‘top line’, the loss of friends and fellow pilots and not least the battle fatigue – are brilliantly conveyed throughout Squadron Airborne. As Squadron Leader Mason, a key character, remarks early on:

Look, from what figures we have available in Fighter Command, the Luftwaffe outnumbers the Raff by about five to one. It may be much more than that, because we don’t know what reserves they’re holding back. So you see, even to keep things at that depressing ratio, we have to shoot down five of them every time we lose a machine.

Later on, after Mason’s confrontation with fellow pilot Bob White (suffering from battle exhaustion and more or less forced to take a rest), the reader is party to Mason’s ruminations on their chances in this rather hard-hitting passage:

Lying on his bed, still awake, he went over the two things he had not said, the first to White, the second to Spencer. He had wanted to tell White: ‘When we lose you, we’ll lose another aircraft as well, and they’re as scarce as good pilots.’ It was very difficult, to have to look at the war as a war, and remain unmoved by its local tragedies. He had wanted to tell Spencer: ‘Apart from overstrain, he’s so terrified of death that he wants to go out and meet it, and get it over with.’

These things were not to be said, these and so many other things. It was bad enough having to think them, and go to bed with them, and eat with them, and fly with them. They were living cancers, inoperable, and it would be offensive to bare them in front of other people.

The high-pressure environment in which the pilots exist is vividly created by the novel – the fictional experiences in Squadron Airborne mirroring those on real-life stations in the summer of 1940.

I’ve read several other wartime classics published by the Imperial War Museum and they have all been fascinating and poignant reads. I have no doubt in my mind that Squadron Airborne will be a worthy addition to the series and I look forward to reading it soon!

Follow along with the blog tour to see what these other bloggers have to say about this book: