For my first post of 2021 I’m delighted to welcome you to my stop on the blog tour for intense and original thriller The Captive by Deborah O’Connor. Thank you to Tracy Fenton and Bonnier Zaffre for giving me the opportunity to read and review this outstanding book. 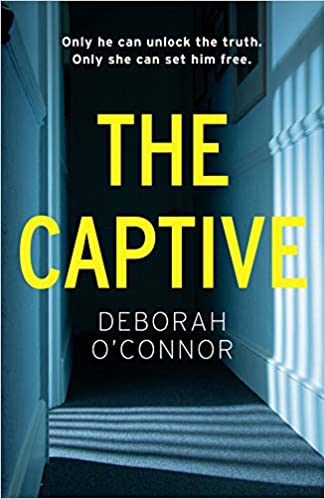 The cage is installed in Hannah’s kitchen. Small, the size of a shopping centre parking space. A bed, a basin, a table and chair. A hatch and metal drawer through which to exchange food and other items.

Then there’s him. Always there on the edges of her vision, no matter how hard she tries to block him out.

Every day, the same thoughts run through Hannah’s mind:

What if he speaks to me?

What if he hurts me?

What if he gets out?

In a near-future justice system Jem, the murderer of Hannah’s husband, arrives at her home to serve out his twenty-year sentence in a cell. There it’s hoped he will learn the true cost of his terrible crime.

But Jem tells Hannah he’s innocent, and not only that, her husband had been lying to her. Soon Hannah begins to question everything she thought she knew. Was Jem wrongly convicted? Or is he simply a desperate man, willing to say and do anything that might grant his freedom?

Only he can unlock the truth. Only she can set him free.

THE CAPTIVE is the standout new novel from one of the most exciting new voices in crime fiction. Part murder mystery, part dark love story, this intensely gripping, high-concept thriller will keep you guessing till the very end. .

Deborah O’Connor is a writer and TV producer responsible for well-loved programmes such as ‘Old People’s Home for 4 Year Olds’ and ‘A League of Their Own’.  She lives in North Yorkshire with her husband and daughter. Deborah’s first novel was the bestseller My Husband’s Son, followed by The Dangerous Kind. The Captive is her third novel.

The Captive by Deborah O’Connor is pure entertainment from beginning to end. An intense and original thriller, it drew me in from the very first page and didn’t let go right up until the final thrilling page had been turned.

I’ve never read a book quite like this one before. Set in London in the near future it portrays a time when the UK criminal system has been radically reformed. Now, instead of going to prison, criminals are kept in a cage in the home of either their victim or their victim’s family for the duration of their sentence. The victim is responsible for the welfare of the prisoner, supported only by a Domestic Liaison Officer who oversees proceedings, making sure everything is running smoothly.

And so it is with horror and great reluctance that Hannah finds herself as host to Jem, her husband’s murderer. Forced to spend time with him due to the fact his cage has been installed in her kitchen where she needs to work, the pair begin to talk, with Jem telling her that he is innocent of her husband’s murder. As more and more details come to light, Hannah begins to question everything she thought she knew about the man she was married to. Could Jem be telling the truth? And if he is, can Hannah find out the truth before it’s too late?

The Captive is an utterly compelling read that I thoroughly enjoyed. With twists and turns throughout, it kept me guessing right up until its final, shocking denouement. Deborah O’Connor’s writing is wonderful, drawing you into the story and bringing this strange but horrifying tale vividly to life. Even the thought of it makes me shudder! Hannah is a character I liked from the outset, with the dilemma she finds herself in making me feel almost protective of her as the story progressed.

I don’t want to say much more for fear of spoiling the story, but suffice to say The Captive is an intense and original thriller that I would highly recommend. The perfect read to kick 2021 off with style!

The Captive by Deborah O’Connor is available to purchase now: Amazon UK